The board of directors of Foothills Community Foundation met on November 19th at the Plaza at the Bleckley. New officers for 2014 were elected by the governing body. Foundation president Robert Rainey recognized outgoing board chairman Fred L. Foster and thanked him for his service to the Foundation in 2013. Smith Wham ended his tenure as board secretary, having served in this position since 2011. 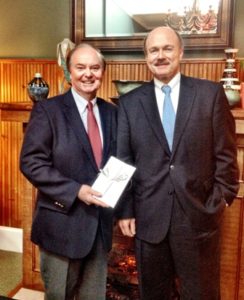