A Partnership Milestone – 8 Years and Counting 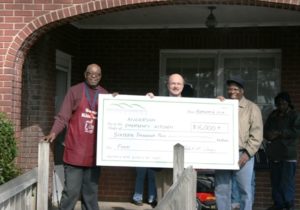 In March 2006, the cupboards at the Anderson Emergency Soup Kitchen were bare. The volunteers who prepare hot nutritional meals for needy persons five days per week were struggling to meet their mission.

McLester McDowell, Chairperson explained, “We are dependent upon the goodwill of individuals, churches and grants to provide these meals.  There is only one salaried employee working at the Soup Kitchen, the cook”.

Foundation President Robert Rainey met with John Brown and McDowell and concocted a partnership between the Kitchen and the Foundation.  Mr. Rainey agreed to pay the grocery bill at Quality Foods for the Soup Kitchen.  “That was 8 years ago” Mr. Rainey explained, “and $16,000 worth of grocery bills paid by the Foundation’s Piedmont Health Assistance Fund”.

According to McDowell, “It would be impossible for the Soup Kitchen to provide this much needed service without the support they have contributed year after year.”